What Can I do with Karate Belts Can you use karate belts in a T-shirt quilt? Yes!

Karate is a sport filled with advancements. The more you practice and grow, the further up the karate ladder you move. With each move comes a new belt that replaces your old belt – a very visual advancement system.

So as you advance, your belt collection increases. The question then becomes, what do I do with all my old belts?

As a T-shirt quilt maker, my answer is to include them in your quilts.   You can also include your Marshall Arts uniforms.

We have been using karate belts in quilts for years. Here is a look at some of the ways we have included them in the T-shirt quilts we have made.

A Border Made From Karate Belts This quilt used 8 belts – 2 on each side of the border. The first belt was used on the top left of the quilt. The additional rank belts followed in a clockwise fashion around the quilt. We also used pieces of the belts as accents within the quilt.

This is a great solution if you have at least 4 belts.

In the photo below, we used the belts for the top and bottom borders. These borders are 8" tall and have 19 belts.

We love the story this border tells. I can just see this young man as he grew up. The little boy coming home in his new uniform with the white belt. Each celebration as he earned a new belt. Each time he worn a new belt, he had grown a little bit. If I were his mom, I would have cried when I saw his quilt! 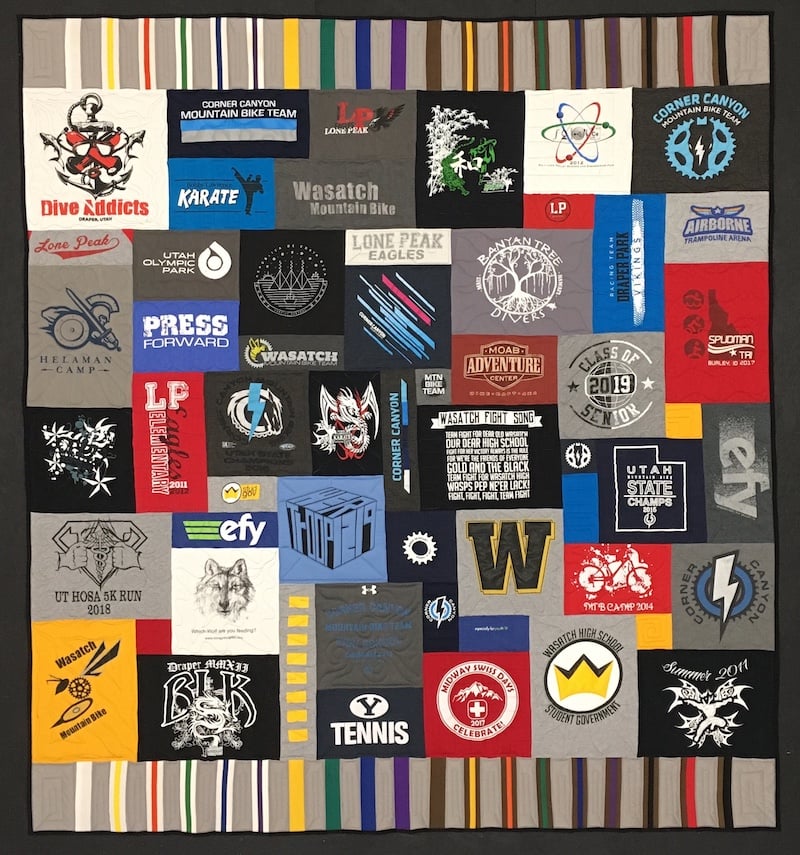 Here is Andrea and Kim talking about this awesome quilt.

Selection of Belts Used Within the Quilt In this quilt, we used just 4 belts.  We used about a yard of each belt. The belts were sewn to black fabric to make the color pop.

This is a solution if you have just a few belts.

Belt Progression On One Block In this quilt we used about 7 inches of each belt. We lined them up in order from left to right.  This made for a nice looking block. The quilt does not scream KARATE, yet that one block speaks volumes about time spent in a Dojo and practice.

This is a great solution if karate was part of your life, but not all of your life. For example, if you are making a “this is your life” type quilt and your life was about a lot more than just karate.  For example, someone graduating from high school.

This is a close up of the quilt in the photograph at the top of this article.

Folded Belt Within the Quilt Another way to show off a belt is to fold it and put it on to a block. In this quilt, the 4 belts that we included had text/writing on each. We folded two of the belts so the text became the focal point of the block. On the other two blocks we just used the section that had writing.

This is a great solution if your belts have text or writing on them.

These are just a few examples of how we have used karate belts in our T-shirt quilts. There are other options available so don’t feel limited if you have other ideas.

If you want to include your karate belts in your T-shirt quilt, we are happy to work with you so we show off your belts just how you would like.

Back to: Athletic T-shirt Quilts